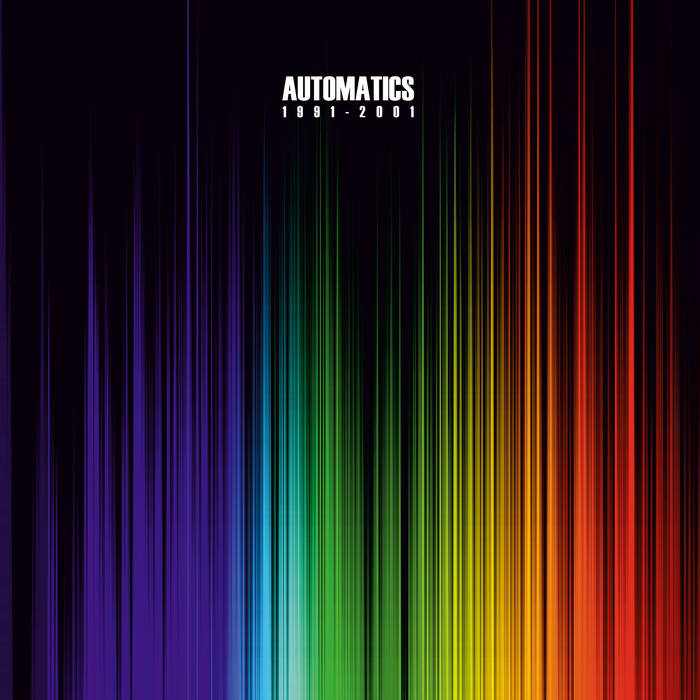 “1991-2001” is a 20-song compilation – of which two songs are completely new and were just recently recorded – that sums up the 10-year span of AUTOMATICS’ existence.

That is, this is a summary of one of the most important independent Spanish pop groups of the 90s. Clifford Records, our friend Laureano’s label, is in charge of the release of this double-vinyl, 500-copy limited edition that is simply a sonic artifact.

This will not be the only time we collaborate with Clifford Records; there will be more compilations and re-releases, but we can talk about that later on. For now, we want to talk about AUTOMATICS, who split up in August 2001 after releasing a wonderful CD-Single with three songs produced by Carlos Hernández and with the vocal collaboration of LOS PLANETAS’ J. The single foretold a powerful fourth album that they ultimately never recorded, leaving the demos for those songs lost in a box.

AUTOMATICS had such an impressive live show and they showed it off again and again in all the most important festivals in our country. There were stellar moments, like at Adrenalin Village in London with nine other European groups for the MTV Eurobaschhh competition, which was broadcast via internet all around the world and where the group proved themselves to be on the same level as the nine best European groups. The following year they would be the only Spanish representatives in the prestigious French festival “Les Eurockeennes” in Belfort, where they played for more than 90,000 people and shared a line-up with GARBAGE, JON SPENCER, PULP, and PORTISHEAD.

Guillermo Z. del Águila, journalist and collaborator at RockDeLux, Efeeme, and many other places, was really close to the group at its beginnings as well as through their evolution. In the following text, he explains some of the keys to understanding this album, the songs, and the universe that surrounded the AUTOMATICS.

After listening to this double-LP several times, I can’t stop asking myself how it’s possible that AUTOMATICS aren’t much more well-known. I think it’s incredible that they aren’t unanimously cited as one of the high-points of national indie music from the 90s.

Maybe it’s because they were never very accommodating with their record labels or their promoters, not even with other bands. They refused to play the game and it seemed like that “scene” wasn’t their thing. They had a lot of influences in common with the majority of the Spanish bands that popped up like mushrooms at the beginning of the 90s (what an impeccable version they did of SPACEMEN 3’s “Revolution”), but something makes AUTOMATICS stand out from the rest. To begin with, they weren’t polite, middle-class indie musicians. The small-town and almost hooligan-like hedonism of the younger members of the group – ironically, much closer to the real personality of THE JESUS & MARY CHAIN, NEW ORDER, THE STONE ROSES, OASIS, and the majority of the British bands – wasn’t common here. It’s true that the other members of the group were more artistic and intellectual, but they came from the previous generation (PRECEPTOS DEVOTOS released their Maxi-single in ’85) and their skepticism kept them away from the indie posturing.

If you really think about it, you have to admit that their artistic concept was definitely radical, even brushing on self-destruction and self-sabotage. Superficially, because they refused to take themselves too seriously, with that pose that parodied the arrogance of the pop stars. And they did it all with such a wonderfully twisted sense of humor that almost no one realized it was a cover-up for their shyness and self-deprecation. And on a deeper level, because they were so adamant about recording songs without defined lyrics, above all when they had sublime choruses that could have been turned into hymns. It was a kind of universal abstraction: the melody is the message and the feeling; all of us begin by listening to music and singing along to hymns with phonetic approximations of the lyrics without really knowing what they’re saying.

The best part was their harmonic, melodic, and sonic brilliance. Because, although it’s true that their musical language was far from original, it’s also true even if they weren’t the only ones they were definitely the best. AUTOMATICS were always the ones who were able to achieve the best sound in those precarious live shows, and that caused for a lot of jealousy. They were the best at recreating sounds, like those incendiary guitars of TEENAGE FANCLUB (“Sixty”) and, of course, the electric and rhythmic detonations of THE JESUS & MARY CHAIN, whose legacy they were trying to carry on after the release of “Automatic” (“To Be Alive” was colored in with a Hammond and “French Boyfriend” was blown up with pop melodies). One of the things they really got right was finding the poppiest point in the intersection between them and grunge (“Emilio”, “Fraguel Rock”, “Suicide”…). But they soon began to go far beyond that. They just as easily captured the Madchester sound (“Swayfest”) as they did the most canonical indie sound with a 12-string Rickenbacker (“She Used To Make Me Smile”), or even kraut-pop (“Sputnik Was Sent Into Space Over 30 Years Ago, In 1957”). By the end of their career they were moving towards an extraordinarily electro-acoustic maturity with more harmonies than noise (“Big Lies Under A Summer Rain (Wilson Love Me)” and “An Empty Page”). They were occasionally accused of having a derivative sound, but it’s difficult to find these melodic traces, which are all over the discographies of other, much more respected groups who belonged to the same factory of catchy choruses as AUTOMATICS. The infectious “Electric Captain” is one of the best national noise-pop songs; the precious “Lone” is an excellent song that transcends genres (that is the very definition of a classic). They were able to produce authentic hymns, exploding guitar-pop’s contagious euphoria (“Watch Over You”, “Between Two Stars”), even taking J&MC’s automatic rhythms to melodic ecstasy (“Psychof*.Bak”, “Pop Star”). Their repertoire is extraordinary. As is usually the case with compilations, some things were left out (there are still some gems in their discography), but there are two new songs in their place: “Black Beach” and “Hello, Goodbye”. The first one brings their classic post-marychain sound up to date, a full-on guitar attack with lazy, reverbed vocals and a melodically genius structure. The second is a pop capsule with inflamed guitars, and once again, insultingly melodic.

This double album, carefully and lovingly produced, might have limited repercussions, but it will definitely sell out. And it’s more than worth it to hold onto this treasure of impeccable songs with electric joviality and tremendous melodies, the kind that get stuck in your head and have you humming instrumental riffs and inventing a language for the choruses, like the first time you felt really moved by music.

Bandcamp Daily  your guide to the world of Bandcamp